Hidden gem in the Indian Ocean
Next

The drive from Tenterfield to our next stop, Goondiwindi (or Goondi as the Aussies, with their predilection for abbreviating everything, predictably called it) was routine, save for the mounting volume of road kill that consisted entirely of kangaroos.

Once we crossed into Queensland, the frequency of cadaverous remains in various stages of decay increased rapidly. It was as if the kangaroos had lined up like bowling alley pins in the middle of the road only to be scattered in all directions by the motoring equivalent of a bowling ball known locally as a Road Train.

We counted over 100 kangaroos who would bounce no more in less than a couple of kilometres at which point, so much death became too depressing to continue counting. 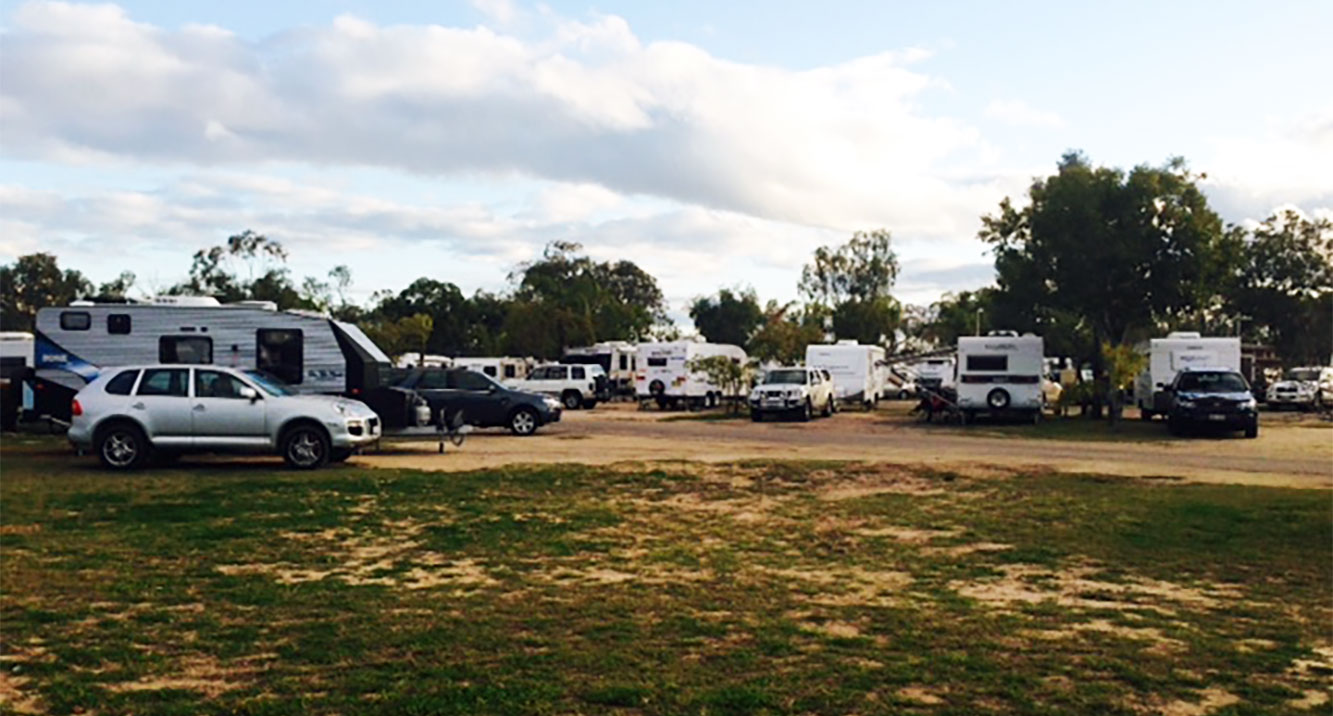 We arrived at our caravan site to be greeted by something we had not encountered before – a queue to get in. There was a line of cars and caravans snaking around the entrance road, advancing one by one as the occupants reached the reception office to be allocated their site.

The reception was the kind of place that sold Kellogg’s Variety packets individually, but stocked no milk.

Edith walked through the entrance door to book us in for the next two nights and was greeted by the elderly lady behind the desk “Your hair is in good condition” she observed.

By Aussie standards, this was a greeting of quite astonishing inventiveness.

After only a few months in Australia one becomes accustomed to the standard greet and response routine:

There are of course more extended exchanges:

There is also a more fulsome response available to the recipient of the greeting if required:

Given the standard Australian greeting, “your hair is in good condition” came as quite a shock to Edith, who, unable to understand the context of the statement, could only manage a “thank you very much” by way of reply.

However, if a person spends two weeks living in Australian caravan parks and has only casual powers of observation the “hair in good condition” greeting makes absolute sense. Let me elaborate.

Edith wears her shoulder-length, light brown hair with a central parting, often with the flowing sides pushed behind her ears in order to achieve a degree of tidiness.

For many reasons, the overwhelming majority of female caravan occupants have long since abandoned long hair.

For some, the additional chore of keeping long hair well groomed in austere camp site amenity blocks is just too much effort and too time-consuming.

For others, the convenience of adopting the short-cropped hairstyle, more associated with the male gender, lowers the cost of regular trips to the hairdressers which are considered by many a frivolous use of limited funds.

But for the majority, the adoption of a style that can only be described as “old man in a dress” is a clear statement to the world. Such women are saying “I don’t care anymore”. And it looks like it.

No wonder then, after greeting thousands of men in dresses, Edith’s arrival in reception prompted a comment about the condition of her hair.

We had reserved an en-suite powered site and it was in a really good location, near the entrance road but not so close that the traffic noise would be a problem and we only had neighbours on one side.

It was laundry time again, so after we had parked, Edith dutifully headed off in the direction of the amenity blocks. She returned moments later all wide-eyed and breathless

“There was a bloody big sign on the door, it just read ‘Beware of SNAKES’! I only dropped a sock down the back of one of the driers, I can’t say I was that keen on reaching behind to try and find it. But I did. Why do you think the snakes are attracted to the Laundry Room”?

“Probably because those driers are on most of the day so it’s nice and warm for them in winter.” I grimly replied.

Of course I made that up – but hopefully it might deter Edith in future from putting her hand into places that might already be occupied by a Taipan, a King Brown, or the presumably quite accurately named, Common Death Adder. 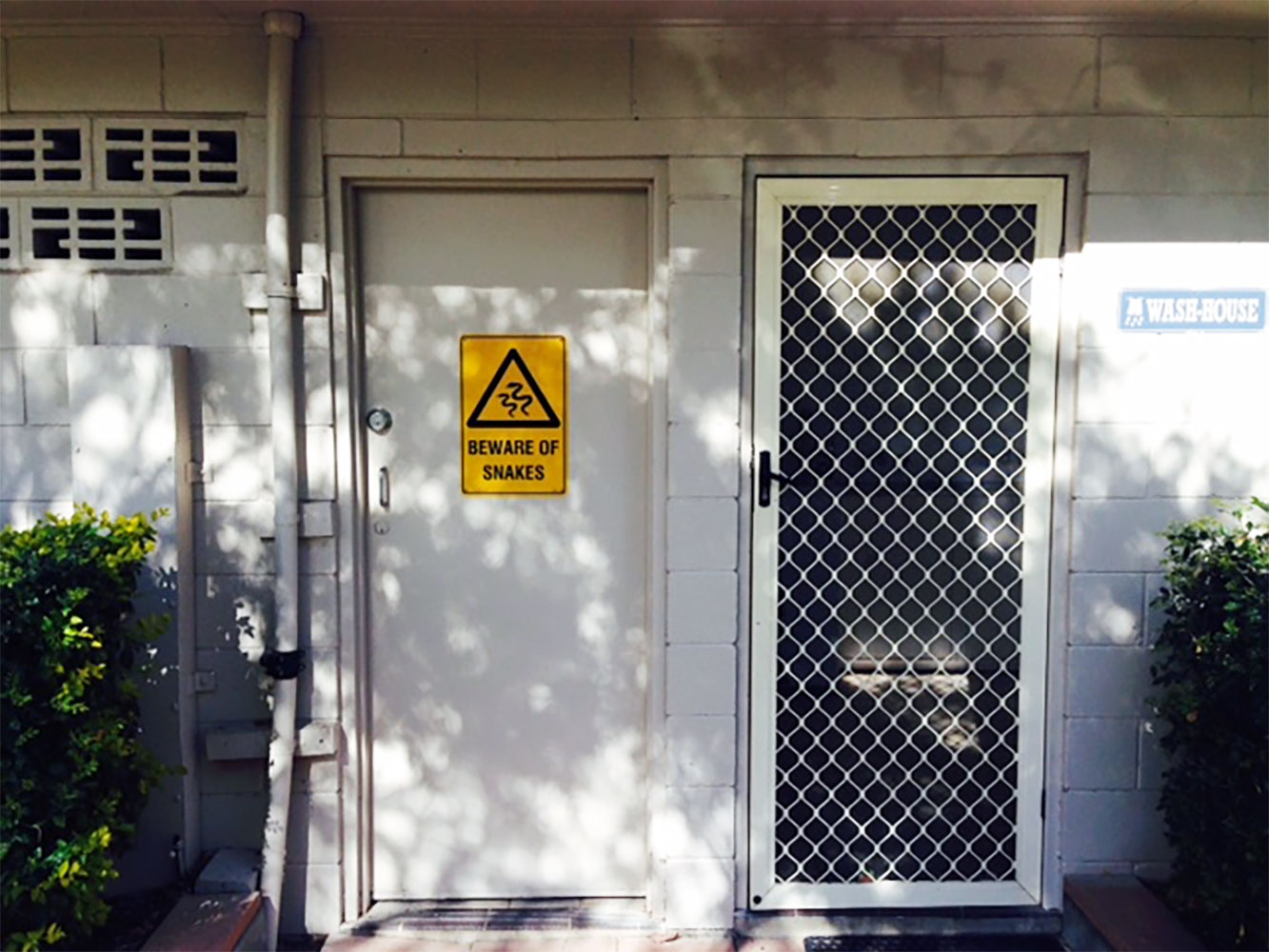 Meanwhile, I had struck up a conversation with our neighbour, Dennis. It didn’t start off too well from my perspective.

“How are you going, Cockroach?”

Dennis enquired looking over in my direction while he fiddled with something in the boot of his car.

I don’t recall ever being addressed as ‘Cockroach’ before, not the most friendly of welcomes and very un-Australian to be so openly rude.

Every year the two states go head-to-head in a best of three match tournament called “The State of Origin” it’s the biggest annual sporting event in Australia with the obvious exception of Ashes Cricket matches against England and the AFL Grand Final. New South Wales fans are called “Cockroaches” by the Queenslanders; in return the Queenslanders get the epithet “Cane Toads”. It’s all very good-natured rivalry but passions run pretty high during the games.

Just as well I didn’t respond to Dennis’ initial greeting with “I’m doing fine thanks, you fat bearded so-and-so”.

Anyway, Edith slipped back to the laundry block, somewhat more cautiously than she had previously, to put the washing into one of the big industrial sized driers, and she managed to nab the last empty one.

Closing the door to commence its 30-minute prepaid drying cycle, she turned to see an elderly gentleman enter the Laundry clutching a single bed sheet. He appeared mightily disappointed that all four driers were occupied.

“Why would you just take a single bed sheet to the driers?” Pondered Edith, before the transforming look of realisation changed her expression.

This little incident reminded me of a sign I saw on another trip to rural Australia a couple of years ago.

Quite understandably, Australians are fastidious about water conservation and consider wasting water to be unacceptable.

In many parts of the country water really is a scarce and precious resource.

I have met people who have told me things like “our little girl, Tammy-Lee, was 5 years old before she saw rain”.

Severe drought conditions, and menacing bush fires, never seem to be far away.

One day, Edith decided she should have a walk along the billabong that skirted the edge of the caravan park.

At the water’s edge there was a campfire area set aside for communal gatherings, sing-alongs and other traditional Baden-Powell inspired activities.

Getting the fire started for tonight’s Damper and Billy Tea fundraising bash for the Flying Doctor Service was John, the park manager. An ex-Sydney-sider, John had been living in Goondi for the past 30 years and “wouldn’t ever go back”. 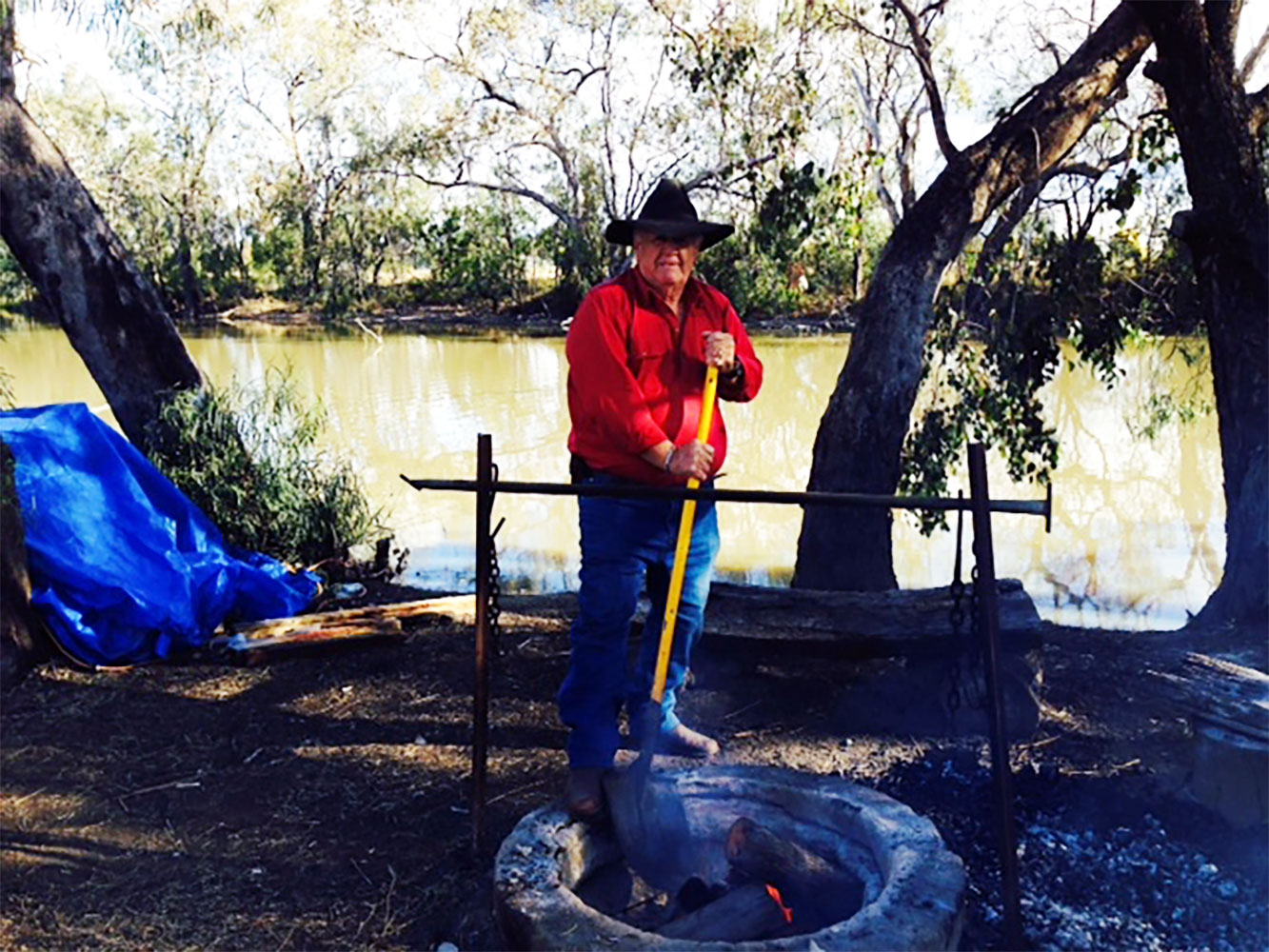 He was also tour guide supremo and wasted little time before giving Edith the hard-sell for the “Beer and Bull Tour” which was mainly a walk around of the local Victoria Hotel followed by a “schooner of local grog”.

Aussies only need to hear your name once and they’ll address you like your best friend for evermore.

At this stage Edith was no doubt planning on frog-marching me down to the campfire later that afternoon until John made the innocent mistake of trying to over-sell the event. He bragged to Edith that

“At 6pm we also have two families of Possums who come down to the camp. I’ll show you how to feed them by hand”.

That did it for Edith.

From that precise moment there was zero prospect of me being brow beaten into drinking bush tea or eating damper among the Possum feeders.

Thank you John. You’ll never know how much I love you.

About the Author: Bob B.

Bob Bell and his wife Edith are two Brits travelling through the great Outback of Australia. Whilst on their journey, they have agreed to become guest writers and keep us updated of their travel experiences through the land of Oz.Bob is a Guest Contributor of The Silver Life.

Hidden gem in the Indian Ocean