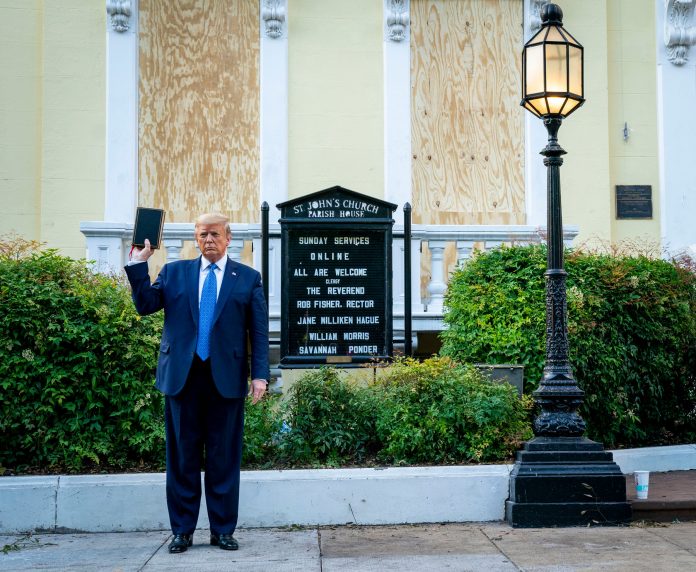 Last week or so I wrote about the great divide I see coming here (Storm Cloud on the Horizon?) and now, sadly, can report that I see very real, very concrete evidence of that unassailable divide.

Last night President Trump decided to show his more “Christian” side (again I have written about my opinion of his Christianity in Trump as a Christian). As well as to take the opportunity to tout his “Law and Order” side.

At this time of huge racial tension, nowhere in Mr. Trump’s entourage was a person of color. Has he no staff, friends, or colleagues whom are persons of color? Surely, at this moment, Mr. Trump could have chosen a more inclusive cast to support him if he wanted to show he was President of the entire country, not just his followers.

While he did hold up a Bible for some unknown reason, he did not choose to bow his head or in any way act reverently while in the historic “Church of Presidents”, which had had a fire just recently. In fact, instead of speaking any words of comfort or peace as Jesus would have done, he spoke only about arresting and punishing the lawbreakers who have caused so much damage and violence.

He wasted a golden opportunity to try to unite us and heal by calling for the prosecution and trial of the police office and fellow policemen accused of third degree murder: The father and son who killed a jogger; and the woman who tried to get an African American bird watcher arrested by falsely claiming an attack by him.

Another gesture could have been to have members of the Democrat party join him in denouncing both the racial injustices in this country and the vandalism and looting occurring nightly.

Maybe he could have included some African American clergy from around the country and some of his Anglo clergy friends.

Maybe instead of calling for every governor to call out the National Guard and threatening to send in regular Army personnel to retake the streets, he could have used this opportunity to call for a national and comprehensive study of how to evaluate and address police violence against the racial minorities in this country.

Maybe he could have said something about the constitutional right to free speech and freedom of assembly guaranteed by our founders that was being damaged by the agitators.

Of course on the other side of the political spectrum, I hear a deafening silence from our national leaders on condemning the looters that have high-jacked what could have been peaceful demonstrations like those of the Civil Rights movement some 60 and 70 years ago. Where also from Mrs. Pelosi, is a gesture of unity with members of the Republican Party? It was left to mayors and governors whose cities and states suffered first hand, to speak out and try to unite. Sadly, it seems that our national leaders were too busy scoring points with their constituencies.

At least now we know that next time someone runs for office under the banner of being able to unite and work together with the opposition, we’ll have concrete proof that this is only lip service. 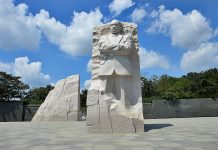 Where do we draw a line? Or is there even a line?