I really would love to have my DNA analysed. I suspect, quite reasonably I believe, that I have Viking blood in me and I would really like to know whether this is so.

So why haven’t I taken a swab from inside my cheek and sent it off for analysis? Initially it was the prohibitively high cost that deterred me but that is no longer a valid excuse. What puts me off the idea now is advice from a valued friend that all such analyses might eventually end up in the possession of the powers-that-be.

That may, or may not, be a real risk and I’m not planning anything criminal, even a parking ticket causes me enormous concern, but I just don’t want something that is very personal to me in the hands of others. Old-fashioned? Maybe, but I don’t think so!

This is also my thinking when it comes to social networks such as Facebook – and several others. Many of the younger members of my family are scornful of the fact that I will not sign up to Facebook but I do not want to run the risk of my personal contact with family members becoming available to people other than those I wish to see it and read it. OK, my approach is similar to the one adopted by those of us that used to shred, or even burn, old letters and documents but what was so wrong and unwise about that?

BBC’s Panorama programme has been highly respected for decades. Recent programmes such as “What are four of the biggest hazards of social media?” have highlighted the dangers involved yet so many seem either ignorant of these dangers or prepared to ignore them.

Another Panorama programme, “What Facebook Knows About You”,  was equally concerning. The deadpan responses the Facebook representative gave to the reporter’s questions clearly emanated from a carefully orchestrated PR policy but they were very chilling indeed for the cynics amongst us, such as me.

So, what next? I am too far removed from the fire to know which way the social networks will try, and quite possibly succeed, to lead us in the future.

There has been talk, for example, of interference in the system of free and open elections that is so central to a democracy. If that were to happen, or to have already happened, it would be far more important than me being served up dog food advertisements just because a friend sent me a photo of his lovely black labrador!

These are indeed worrying times so I think I’ll just stick to my very old-fashioned way of keeping in touch with my family and friends. It has served me very well so far and I see absolutely no need to change it. Am I so strange for not wanting everyone to read my personal correspondence? 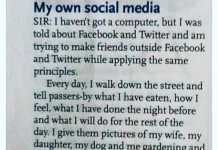 My own social media 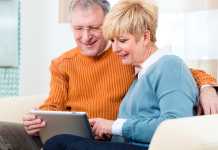